History of the Howth Seventeen

The plans of the Howth 17 class were originally drawn up by W. Herbert Boyd in 1897 for Howth Sailing Club. Designed to endure the local rugged conditions that many of the keel-less boats of that era such as the 'Half-Rater' would have avoided and often struggled with, they were to be a miniature of the giant yachts of their day such as Britannia and Satanita. The gaff-rigged design with jackyard topsail provided the first enthusiasts with an immediate challenge when the first five boats raced from Carrickfergus, where they were built by the renowned John Hilditch, and set out for Howth - a 90 mile journey that would confirm the robust design and build of these boats in the spring of 1898. 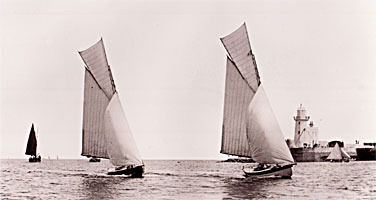 On Friday April 29th at the HSC Spring General Meeting, the class rules were finalised in preparation for racing the following day although inclement weather postponed their race until the following Wednesday 4th May 1898. This was to be their first 'official' race of what is now recognised as the world's oldest one design keelboat which is still racing today as originally designed.

The original fleet of 5 comprising of Rita, Leila, Silver Moon, Aura and Hera was increased in 1900 with the addition of Pauline, Zaida and Anita. The growing class treated its sport with proper seriousness, and after each race the winner was hailed with three cheers by each of the other competing boats - a tradition that is still respected today - treated with some amusement by Howth Fishermen who nicknamed the new boats "The Hip-Rays". 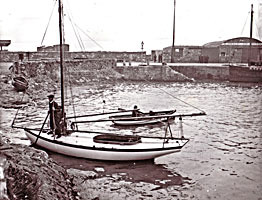 Judge Boyd's Aura being launched in the spring of 1899 in Howth Harbour. He was still sailing Aura, single handed at times, past his 80th birthday.

The class increased in number again and by 1913 an additional nine boats were commissioned by Dublin Bay Sailing Club for racing from Kingstown (Dun Laoghaire) - Echo, Sylvia, Mimosa, Deilginis, Rosemary, Gladys, Bobolink, Eileen and Nautilus. An exceptionally severe winter storm wrecked Silvia beyond repair in 1915 while she stood at the head of the slipway at the Royal Irish Yacht Club. Undeterred, the fleet enthusiastically took every opportunity to combine north and south-side fleets and compete in regattas from Skerries in north Dublin to Wicklow during the horrors of the Great War and the dark days of 'the Troubles' in Ireland.

The middle part of the twentieth century saw Gladys somehow make her way to and back from the Solent and Deilginis was restored from the sorry state that she was found in Dolphin's Barn, Dublin and re-launched in 1971. The relentless easterly winter gales of 1978 smashed the roof of the 'Long Shed' on Howth's East Pier where several Seventeens are kept since time immemorial, and badly damaged the hulls and decks of Hera and Rita. A fund-raising drive (in true Seventeen style) ensured that the damaged boats were properly repaired and lived to race another day. 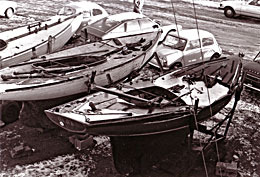 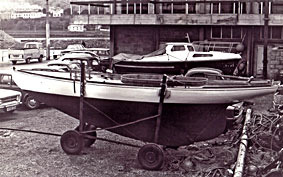 (Click here to read a quirky anthology: Boyd's Boats - by Gerald Fitzgibbon in 1972)

But then in July 1984 a further crisis occurred when Mimosa foundered off the Baily while taking part in the Class's race from Howth to Dun Laoghaire as part of the Royal St George Yacht Club regatta. While the boats started the race in near calm conditions, a building south easterly wind made for difficult conditions and the steep seas swamped the 77 year old Seventeen which sank like a stone and was lost into the deep and jagged crevices that create such difficult seas in that area under certain conditions. The quick and brave actions of fellow 'seventeeners' ensured that the tragic loss of the Mimosa did not extend to her crew. 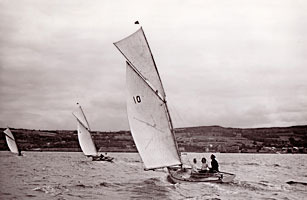 Thus the class was reduced to 15 for a few short years until in May 1988 after an extraordinary gala ceremony, Isobel and Erica were launched in the lee of the brand new building of Howth Yacht Club, the boats having been built in a shed at Howth Castle - the first of the class actually built in Howth. The class had at last been restored to 17 boats after a gap of 73 years. 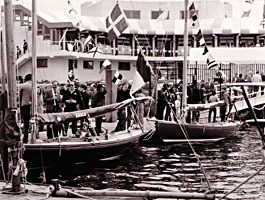 Erica and Isobel are launched in front of HYC's new clubhouse

The class celebrated its centenary a decade later in 1998 when all five of the original century-old fleet continued to race into their second century. Several of the boats were road-trailed to Carrickfergus and sailed back to Howth in freezing April weather.

A project to build another boat that had been started early in the 21st century by Wicklow-based builder Charlie Featherstone was completed in May 2009 with the assistance and contribution of various members within the class as well as the vital assistance of Offaly based boat-builder Dougal McMahon whose skills were sought to complete the decks and attach the 16 hundredweight (812kg) keel. The boat was named 'Sheila' (following the tradition for many of the class to be given female names ending in 'a') after Shelagh Wilkinson, widow of Norman Wilkinson who was the sixth owner of 'Leila' for 51 years from 1948 to 1999. The boat was launched amidst the by now traditional fanfare on the 23rd May 2009. 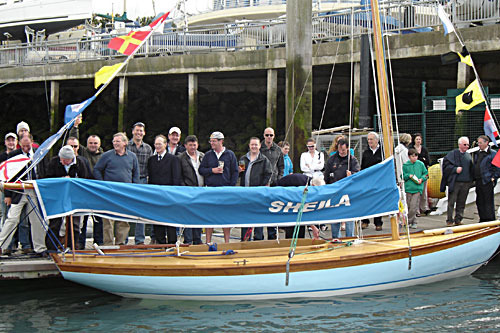 A further project to build a boat was started in 2016 by Ian Malcolm and he commissioned the traditional boat-building school in Brittany 'Skol Ar Mor' to undertake the task. The boat was the first built outside of Ireland and was launched in the summer of 2017 and named 'Orla' after Ian's sister. 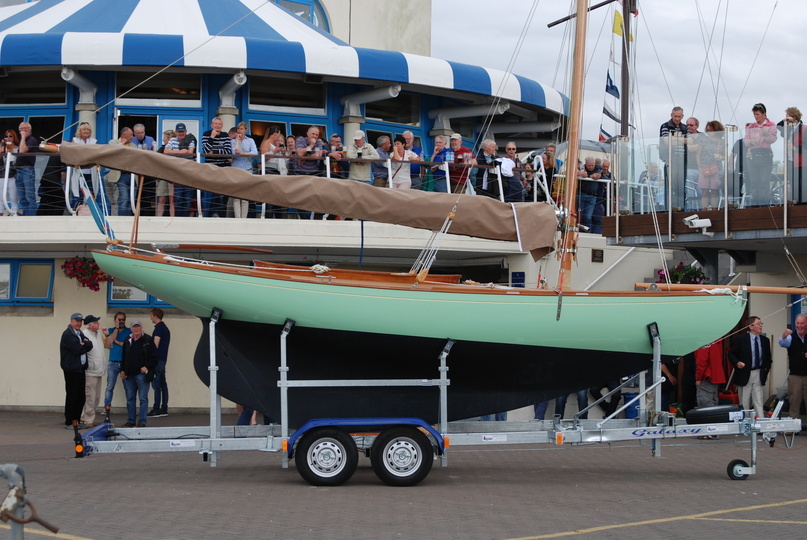