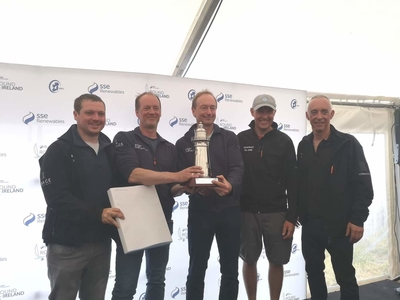 There were four Howth entries for the 2022 SSE Renewables Round Ireland race, Wicklow SC’s biennial clockwise race around Ireland and its islands.  Only three of the boats made it to the start on June 18th – Simon Knowles’s J109 Indian, Rob Rendell's Grand Soleil 44 Samatom and Michael and Richard Evan’s J99 Snapshot - following the withdrawal of Nigel Biggs’ and Dave Cullen’s First 50 Checkmate XX due to a COVID outbreak amongst the crew. Michael Evans has written the account of the race below, as seen from aboard Snapshot. 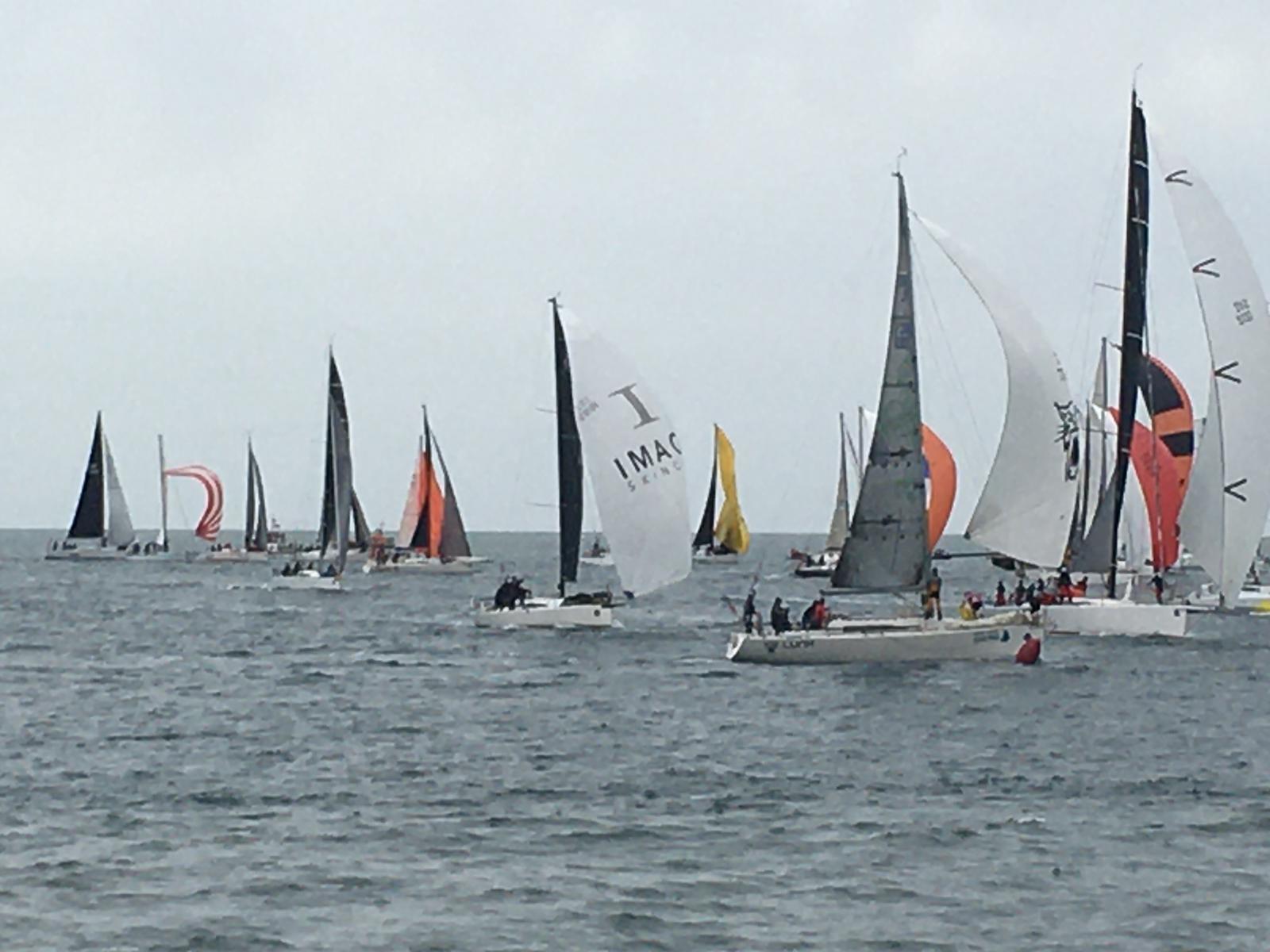 The starting line was between Wicklow Harbour and HYC’s Committee Vessel, Star Point, which had been called into service when the planned starting boat became unavailable.  It was comforting for the HYC crews to hear over the VHF the familiar voice of HYC’s David Lovegrove, speaking from HYC’s boat, advising competitors to ‘Be careful on the start line - it's a long race’

It was a running start for the 40 + yachts, of which our J99 Snapshot was the second smallest in the fleet. Several gybes and crossings of other yachts kept us busy on the way down to Wicklow Lighthouse, perched high on its intimidating rocky headland.

Our next leg was a close-hauled leg that extended into the evening, followed by night-time sailing where you cannot see what is in front and have to rely just on the instruments and the feel of the boat, which is intense and very demanding on the helm. The dolphins looked like torpedoes beside the boat, leaving phosphorescence trails in the water and breaking the surface every so often.

Tuskar Rock at the southeast tip of Ireland was rounded without issue and we then headed for the Fastnet Rock off the southwest tip, the next corner of the course. All was good but we knew there was a substantial weather change forecast for us as we moved onto a beat up the west coast.  By the time we reached the Skellig Islands we had done 30 to 40 knots hard on the wind in a very disturbed sea. 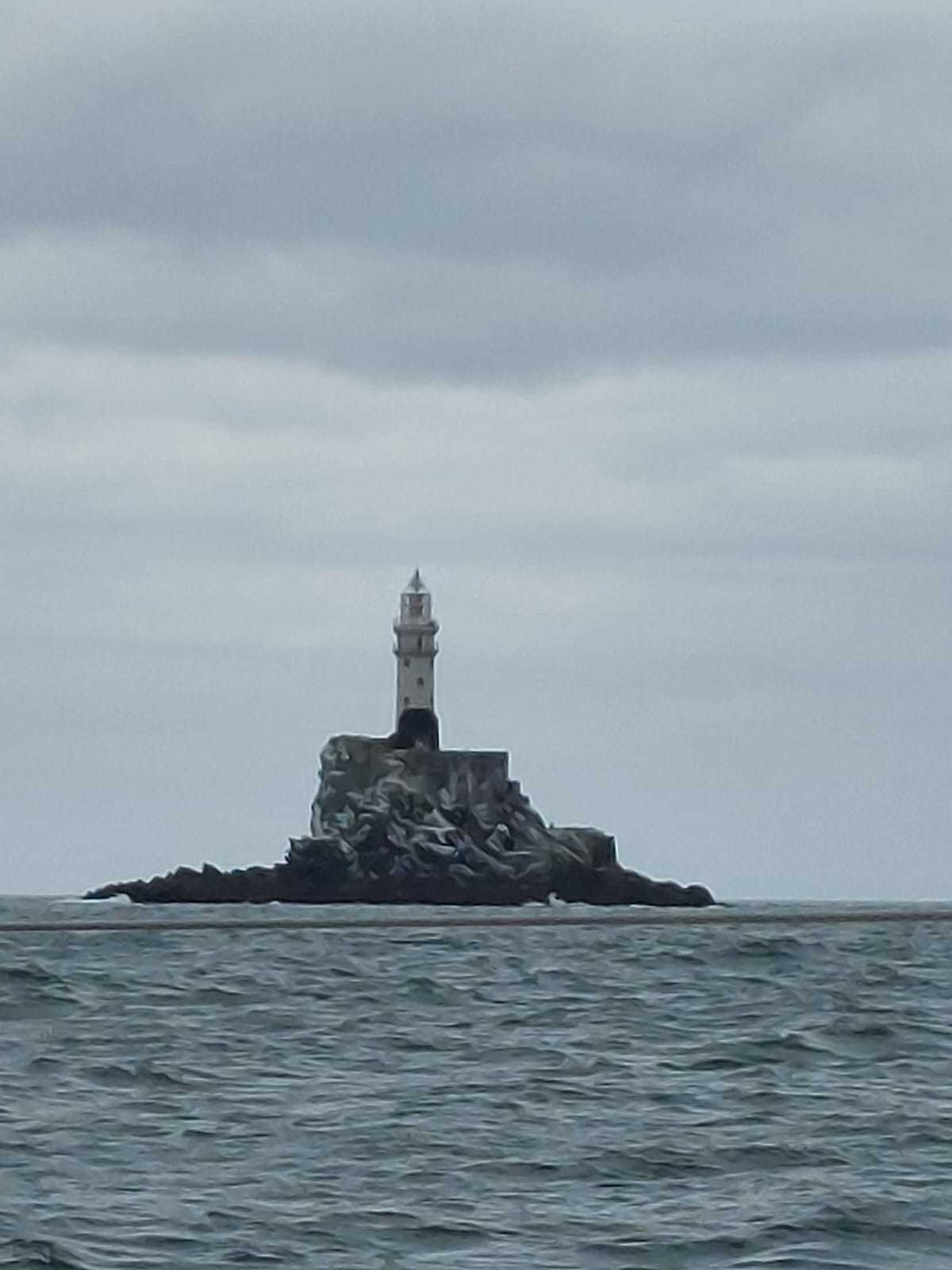 With six of us onboard, we ran shifts of 4 hours on and 2 hours off.  The hardest part was getting in and out of wet gear while the boat was heeling at 20 degrees and pitching, sometimes slamming, as we nosed through the swell.  Nausea set in for a few of the crew and, with a night of sailing to get through, there was not much time and only limited interest in taking in the views of the scenic Skelligs.

A new weather system coming in from the Atlantic offered an advantage in sailing out to the west on starboard for a few hours to meet the new wind and then tacking and coming back into the coast on a port hand lift.  Given the conditions, some of us found that a little daunting but we were reassured when our navigator Nick Cherry advised that we were leading after this incredibly tough section of the race.

The weather strategy paid off and we turned onto the north coast in good position chasing Cinnamon Girl, a Sunfast 3300, who by now was leading our Class. 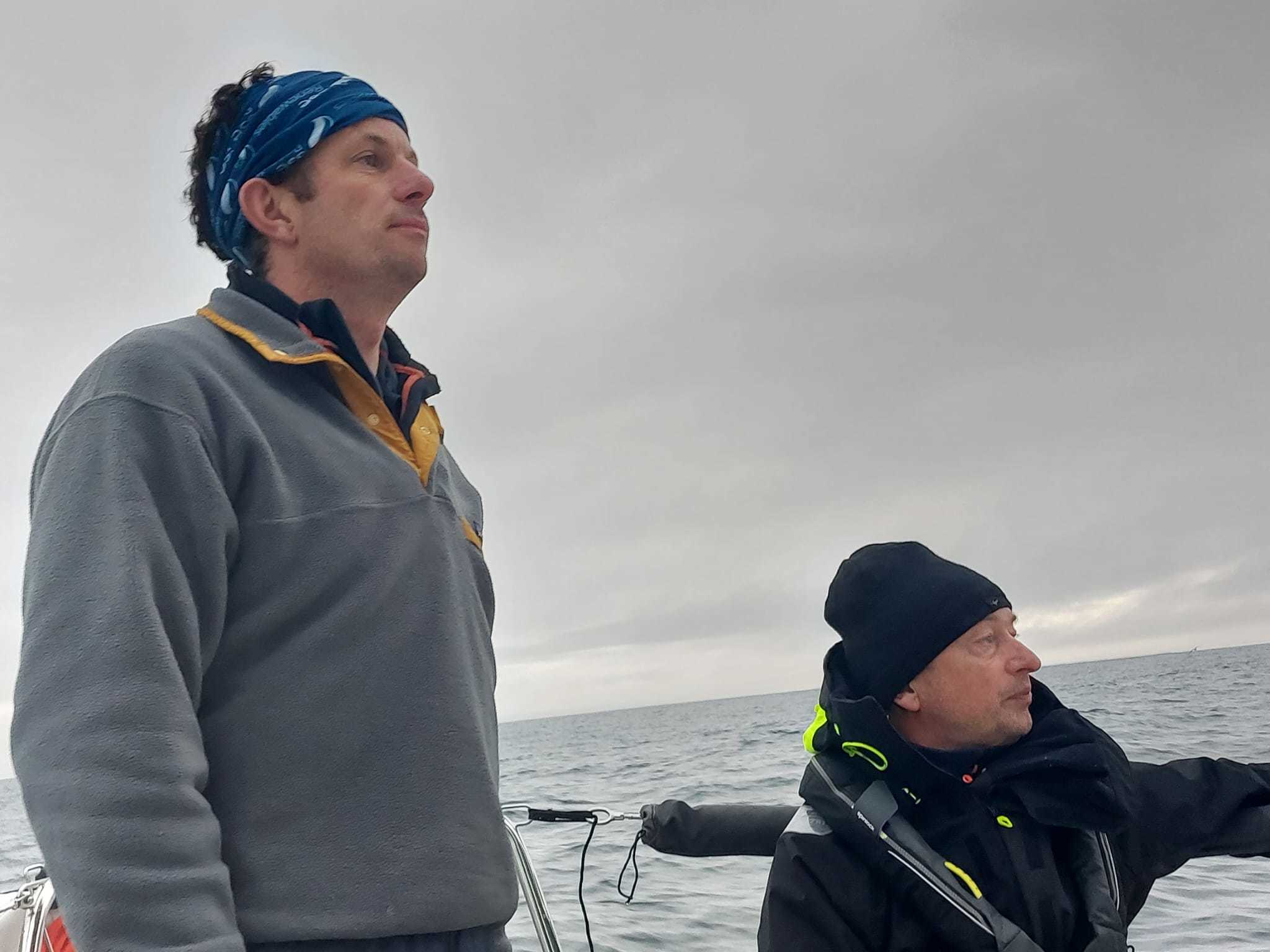 We rounded Rathlin Island in sync with the tide and headed down the northeast coast under spinnaker, all the while closing on Cinnamon Girl and then overtaking her after we crossed gybes several times.  It was fun to do boat-on-boat racing, as in such a long offshore you might often not see another yacht for a long period of time and racing another boat is more exciting than racing the instruments.

However, once we were abeam of the Mourne mountains things got tricky as the wind dissipated. Following a night of hardly any wind, our final morning of the race was spent in extremely frustrating light-to-zero breeze.

Although this gave us plenty of time to admire the wildlife, including puffins, porpoise and whales, our slow progress while we chased puffs was eating into our lead. On several occasions we were taunted by a breeze filling in and filling our Code Zero, encouraging us to believe we were back en-route to the finish in Wicklow, only for it to go fickle and back to zero knots again.

By now we knew that we had a narrow window to finish within if we were to win – we had to cross the finishing line before 4.45pm to secure the overall title by beating the time of the French crew on Laurent Charmy’s J111, SL Energies Groupe Fastwave. They had finished at Wicklow several hours earlier and were now ashore studying our progress intently. The breeze finally filled in and settled in direction and, with the crew at full hike in 15 knots but the tide flooding north against us, we tacked as close inshore as we dared to shorten the time needed to get to the finish line.

After a race that took us 5 days and 5 hours, we lost out on taking first overall by just 5 minutes.  As well as second overall, we were delighted to win Class 3, the largest class in the event, be the first Irish boat overall, and to be part of the winning trio in the team event with Paul O’Higgins’ Rockabill VI, a JPK10.8, and Michael Boyd’s Darkwood, a J121. 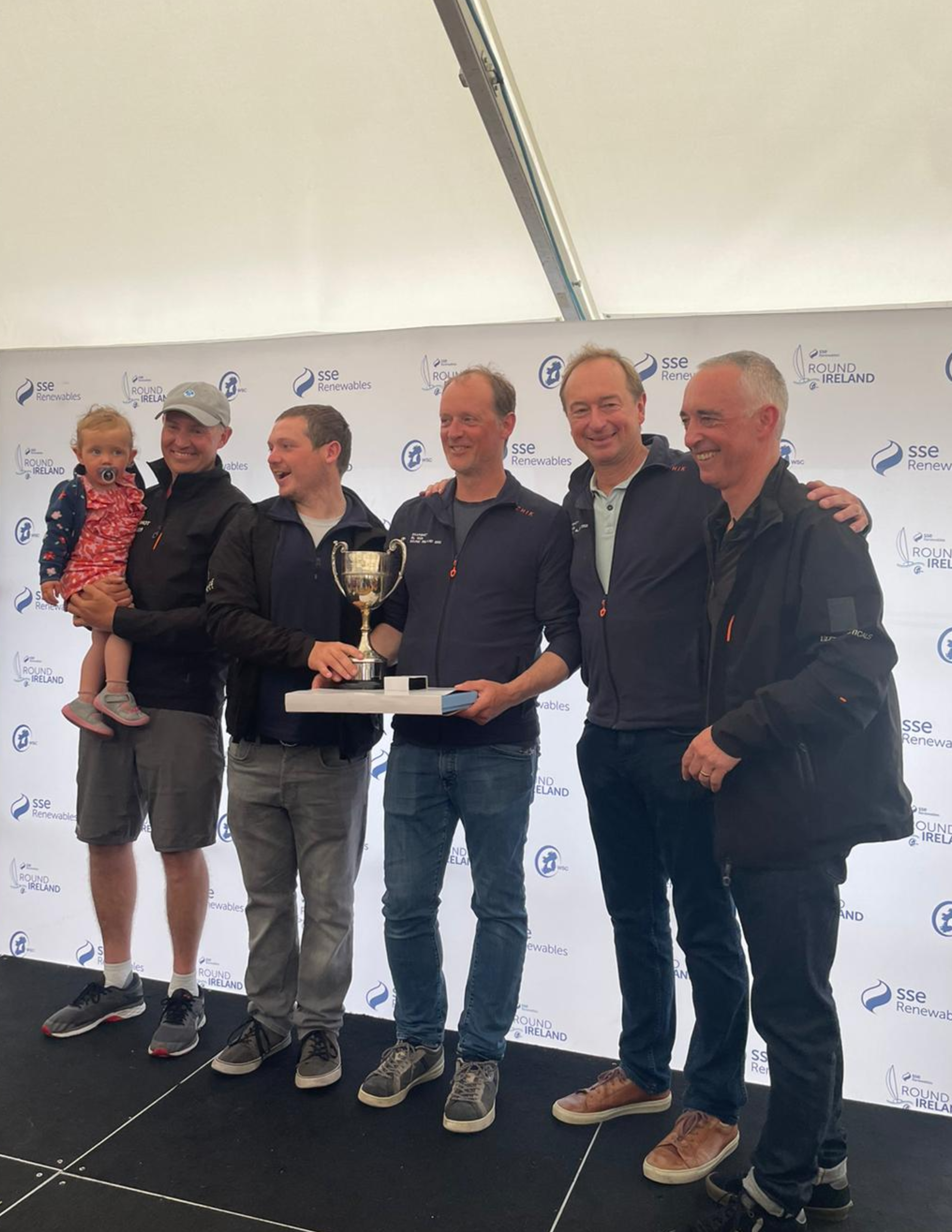 Although a challenging event, having a nice mix of crew with experience definitely helped. Each of us found it to be a great experience and recommend it to anyone who has it on their bucket list. The next Round Ireland will take place in 2024 – so plenty of time to consider and plan for it! 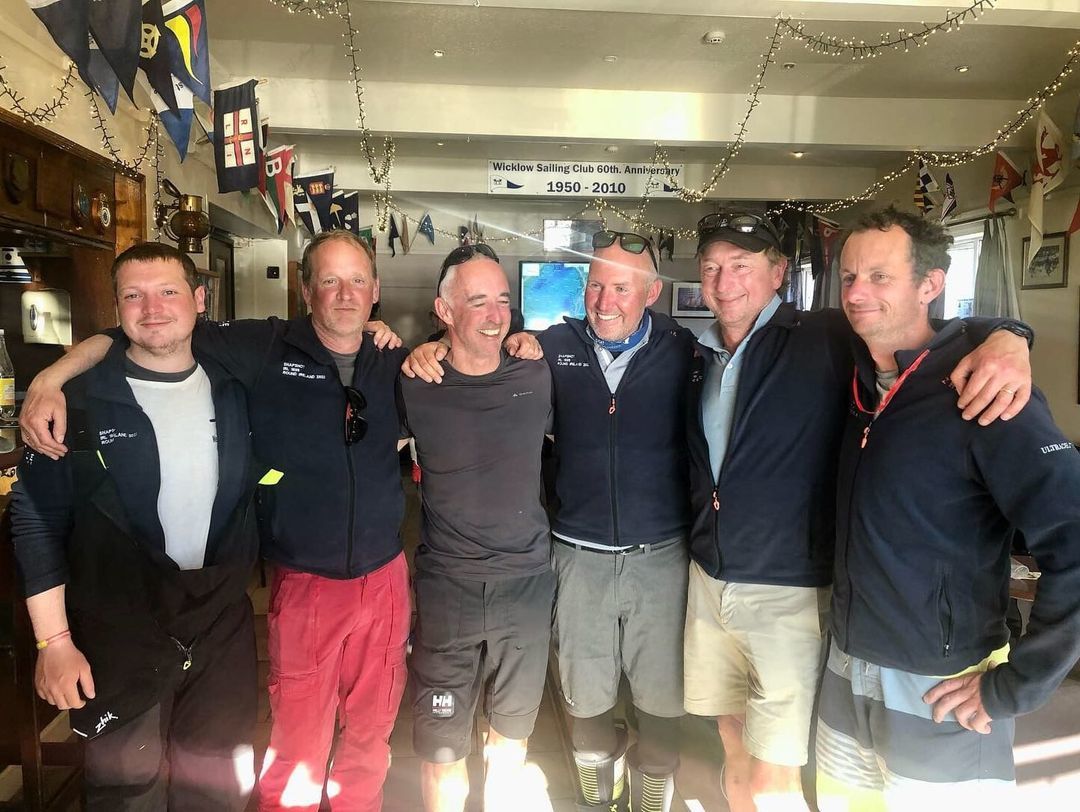