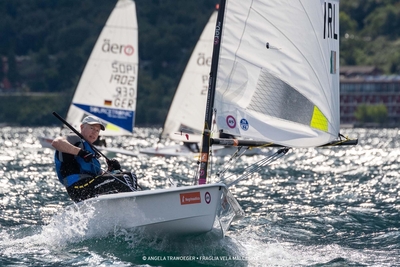 Easter weekend saw the first event of the 2022 RS Aero circuit  take place at Monkstown Bay Sailing Club in Cork. The Aeros from Howth, Dun Laoghaire, Greystones, and Monkstown were joined by the RS 400s and 200s.

The first day dawned with forecasts of gusts up to twenty knots. The plan according to the sailing instructions was to sail out to the more open waters at Cuskinny, a three-mile sail out. Luckily, the sensible people at MSBC decided that it made more sense to sail the event in the river and bay directly in from of the club. This decision was greeted with some relief by those whose hiking muscles had not been put to the test since last season. In addition, it was decided to aim for four races on Saturday as the forecast did not look promising for Sunday.

Four races were sailed in winds gusting between 12-18 knots and a very shifty weather mark approach made for many place changes and a premium on keeping heads out of the boat. However, the key factor was the strong flood tide which meant everybody trying to get right as early as possible in the Southerly wind. Unfortunately no racing was possible on Sunday.

In a very close event Daragh Sheridan from Howth Yacht Club retained the event he won last year on countback from local Monkstown sailor Rob Howe and the podium was completed by Noel Butler in third.  The entire Aero fleet were delighted to welcome Noel  back who was making an incredible return to sailing following serious heart surgery in January.

The next Aero event is  the Nationals being held in Ballyholme on the 14/15th May 2022.