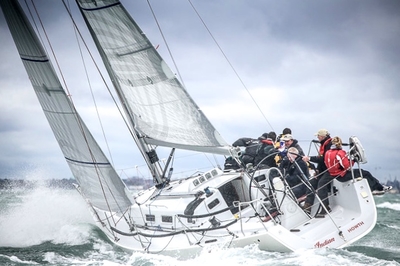 Simon Knowles’ J/109 Indian has put in a gallant showing for Howth to take fourth overall in this year’s only big offshore race, the Fastnet 450.   Photo Afloat.ie/David O’Brien

Howth Yacht Club came very well out of the Optimist Nationals at Royal Cork ten days ago, with Johnny Flynn the new champion and Rocco Wright finishing third overall writes Winkie Nixon. So there was a certain amount of pressure of expectation on our two entries in the weekend’s pop-up 266-mile offshore race on Saturday 22nd August from Dun Laoghaire (where the National YC’s 150th Anniversary plans have been mangled by the pandemic) round the Fastnet Rock and back to Crosshaven, where most of the Royal Cork’s planned Tricentenary plans have also been blown clean away, with entrants for events like the socially-distanced Oppie championship being limited to the island of Ireland.

When the 2020 Round Ireland race from Wicklow - re-scheduled by the pandemic from mid-summer weekend in June to the 22nd August – was finally cancelled on August 9th with less than three weeks before its new date, the determined Cork trio of Mark Mansfield, RCYC Rear Admiral Annamarie Murphy, and SCORA Commodore Johanna Murphy decided to see if they could put a completely new race together for the same August 22nd weekend start, but with all entrants being firmly told it was pure racing –  shoreside activity of any kind would be minimal.

There was barely a fortnight to go as the clearer outline of this pop-up event began to take shape. But it soon had entries pouring in with its catchy name of the Fastnet 450, which is the 150 years of the National YC and the 300 of the Royal Cork combined, while the actual distance from Dun Laoghaire leaving the Muglins, Tuskar, Coningbeg and Fastnet Rock to starboard and the Daunt Buoy to port before finishing at Roche’s Point in the entrance to Cork Harbour is around 266 miles, though nearly all entrants were to sail more than 300.

Howth almost immediately had two boats into the 20-strong entry pot, both of them disappointed Round Ireland entrants in the form of Robert Rendell’s XC 45 Samatom and Simon Knowles’ J/109 Indian. Samatom inclines toward the cruising end of the performance cruiser spectrum, so if the race involved a preponderance of windward work – which proved to be the case – it wouldn’t really suit her, and while she was in the running at times, eventually - after getting round most of the course including the Fastnet itself - she retired into Kinsale rather than continue over the final 15 miles to Crosshaven.

But Indian was in there as a frontline contender from the start, her crew of all the talents of Fingal including – in addition to Simon Knowles himself – Anthony Doyle, Frank Dillon, Jon Hartshorn, Cillian & Rima Macken, Darragh White and the key man, John Flynn, who was there under double pressure, as his son Johnny Flynn is the new Optimist National Champion.

As Simon reports, although the wind after the start at 1300 hrs Saturday was sufficiently off the land to lay the course – sometimes with sheets slightly cracked - down the Wicklow and Wexford coasts towards the Tuskar, it was gusting to 30 knots, at times it headed to make it a dead beat, and with the spring ebb running full blast, the sea state was rough and the sailing was brutal.

As for the competition, it was fierce, as their most frequent contender was the Sunfast 3600 Hot Cookie (John O’Gorman NYC) a sister-ship of Conor Fogerty’s OSTAR-winning BAM! with the special talents of Maurice “Prof” O’Connell on the strength, and Indian was also in face-to-face competition with two newer J boats, Andrew Algeo’s J/99 Juggernot 2 from the Royal Irish YC, and James Tyrrell’s J/112E Aquelina from Arklow.

After they’d put the Tuskar astern and came hard on the wind late on Saturday evening, things were looking extra good for the Howth boat. For though the tide had turned to be against them, this smoothed the sea a bit and yet they were past the area of maximum adverse flood stream, while as a bonus, they and Juggerknot 2 found a favouable if brief twist in the wind which enabled them to lay the course, putting them right into the frame.

That little twist of wind wasn’t to last, but it helped to keep them well in contention in a fleet where the current top performer from  Cork, the Murphy family’s Grand Soleil 40 Nieulargo – fresh from winning the Kinsale-Fasnet-Kinsale Race a fortnight earlier, and with her crew including Olympian Nin O’Leary – was battling for line honours at the sharp end with Chris Power Smith’s higher-rated J/122 Aurelia (RStGYC), with the very fast little new Sunfast 3300 Cinnamon Girl (Cian McCarthy, Kinsale, with Mark Mansfield on board) never too far astern in third.

It was an unremitting dead beat the entire length of the south coast. And with more wind offshore, that was the place to be, such that some boats were 35 miles at sea before they tacked for the Fastnet. Aboard Indian, they were well in the hunt, and after the 24-hour mark, everyone had settled down to the determined routine of endless windward work with seasickness conquered, proper meals  being served, and Hot Cookie and the other two J Boats kept in hand, with the only problem being that the nearer they got to West Cork, the lighter the wind became.

So it was frustrating work getting to the Fastnet Rock itself in the dark, and they rounded at 0245 hrs on Monday morning in just 8 knots of breeze, lying a good 4th on corrected time, but knowing that in a long and meandering 60 miles run back to Cork Harbour, they’d somehow to keep a lot of boats covered in a difficult downwind leg where, once again, the best of the wind appeared to be offshore.

While on the wind, they’d been able to keep Hot Cookie well in control, but this long run suited the Sunfast 3600 better. Yet with her lower rating Indian was able to keep in touch, and coming in past the Old Head of Kinsale late on Monday morning, they knew the Cookie was ahead while Juggerknot and Aquelina were astern.

But the challenge of maintaining sufficient proximity to Hot Cookie made for a tough final three hours, yet they managed it, in fact they did so well that not only did they stay ahead of the Sunfast 3600 on corrected time, but they even closed the gap on her newer smaller sister Cinnamon Girl. 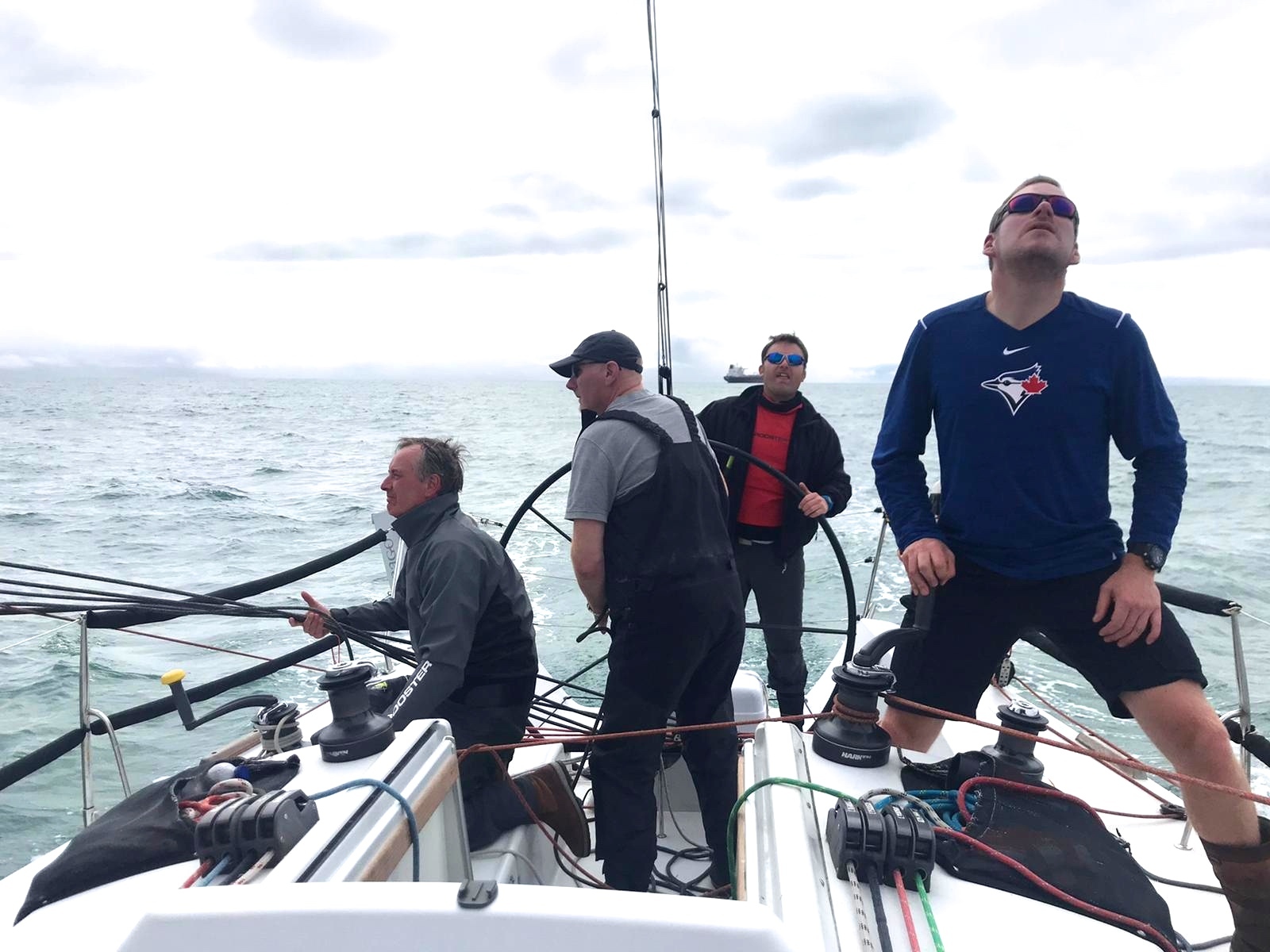 Those final tricky downwind miles. With the Old Head of Kinsale well astern, and the finish coming into view, Indian’s crew sorting themselves for a gybe are (left to right) John Flynn, Simon Knowles, Cillian Macken on helm, and Jon Hartshorn.

At the sharp end of the fleet, Aurelia took the line honours at 1026 hrs Monday, Nieulargo was next in 23 minutes later to take an unassailable overall lead, but back down the line Cinnamon Girl was bedevilled by very light patches, and all the time Indian was taking it out of her. So when Cinnamon Girl finally got across at 1146 hrs, she still was third overall, but it was by a smaller margin ahead of Indian, which was fifth across the line behind Hot Cookie, but corrected into a good fourth overall to round out a successful fortnight for Howth Yacht Club down Cork way.

As to what virtual celebrations are like, we’ll have to wait until they get back to Howth to tell us. With the remains of Storm Frances now well cleared, having gone through in all its power since the Fastnet 450 finished, Indian leaves Crosshaven for home tonight (Tuesday) after the virtual prize-giving at the RCYC.