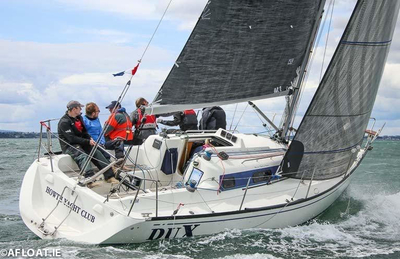 The National Championships were held in Dublin Bay last weekend and Howth boats reigned supreme, taking podium finishes in every division entered and Anthony Gore-Grimes’ DUX, emerging as overall national champion, having won the 22 boat Division 3 with a 3 point lead over the 2018 national champion, Rory Fekkes.

The Howth half-tonners were unbeatable in Division 2 and a closely-fought series concluded with Darren and Michael Wright’s new steed Mata  taking first place. David Cullen rounded off the podium in third place in Checkmate XV .

Not to be outdone the recently crowned winner of the Lambay races Demelza discarded a first to be the overall winner in Division 5.   Division 1 was a large fleet mostly consisting of J109s and whilst John Maybury’s Joker II retained his Division 1 national title for a fourth year in a row.  Howth boats came in 2nd and 3rd with the Kelly’s Storm and John Murphy's and Richard Colwell’s OutraJeous .  A great result for all Howth boats and good omen for the upcoming Sovereigns Cup in Kinsale and Volvo Dun Laoghaire Regatta.

Photo reproduced with the kind permission of Afloat.ie