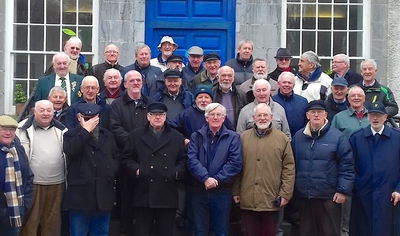 One of the last outings of the Howth ROMEO’s prior to ending their winter series of excursions over 30 of them visited Boyle, Co. Roscommon and had a very comprehensive and enjoyable experience. Travelling by train to Boyle the first part of the day consisted of a visit to King House where they were given a very informative history of the Connaught Rangers by Paul Malpas. Next on the programme was an interesting visit to the old Court House where Frank Geelan, Chairman of the Court House Committee gave a most interesting talk on the progress on the construction of a massive three layer train set layout. The final venue prior to getting the train home was “Whistlers” where all enjoyed excellent food and beverages.

The Connaught Rangers ("The Devil's Own") were an Irish line infantry regiment of the British Army.  Between the time of its formation and Irish independence, it was one of eight Irish regiments raised largely in Ireland its home depot was in Galway.  Boys as young as 14 years, “five feet in height and growing” were recruited to serve.  Following the departure of the King family in the 1780s, the Connaught Rangers were based in King House from the late 1790s.

After World War 1, the Connaught Rangers stationed at Jullundur, India staged a mutiny. The mutiny was provoked by the Black and Tans, a hastily recruited police force designed to deal with unrest and IRA activity. 69 mutineers were court-martialled, 14 sentenced to death but only 1 was executed: Private James Daly.

The Connaught Rangers were well known for their marching song, It's a Long Way to Tipperary. The 2nd. Battalion sang this song on 13 August 1914 as they marched in parade order through the streets of the French port of Boulogne on their way to the front. They were disbanded following the establishment of the independent Irish Free State in 1922.

The Connaught Rangers museum in King House is a unique display of donated artefacts and family mementos belonging to the soldiers who served in this famous Irish regiment.

King House is a magnificently restored Georgian mansion located in Boyle, Co. Roscommon. Built in 1730 as the seat of the King family, a powerful landowning dynasty, the house later became a military barracks.

At the end of the Civil war in 1923, the house/barracks passed into the control of the newly-formed Irish Free State Army. Following many years as a merchant’s store, King House was saved from demolition in the late 1980s and restored to its former Georgian style by Roscommon County Council.

The house is now open to the public as a museum bringing its history to life. It plays host to musical, dramatic and cultural events and is a central locale for the ever-popular Boyle Arts Festival.

Despite the fact that King House and the Court House were not open to the public when the ROMEOs visited them, they were able to have them opened through contacts.

Photographs by Sean O’Dowd and Pat.