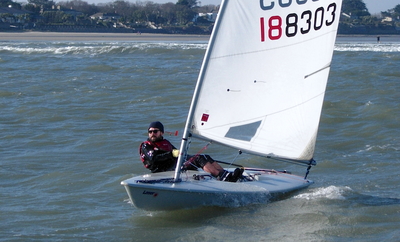 With the understanding that champagne is best served chilled, the conditions for Laser racing in Howth Sound today were spot-on perfect. The southeasterly wind of 18 - 20 knots against the ebbing tide had thrown up a good wave pattern that allowed the 17 competitors revel on the off-wind planing legs while the concentration and reactions required to keep the sails above water ensured that the frigid air and sea temperature was low amongst their concerns.

The windward mark being near the end of the West Pier gave those out to admire the Sunday morning view something extra to watch as the boats tacked up to it and then disappeared towards Ireland's Eye in clouds of spray. It was a a day where fitness and skill were at a premium and Ewan McMahon and Ronan Wallace showed that they had both in abundance. Ewan opened up a sizeable lead in both races, particularly in the second one, to lead Ronan home while he in turn was a good distance ahead of the third placed boat, David Quinn taking the honour in race 1 and Stephen Quinn in race 2. T Fox and P Hassett each took a first place in the Radials while Dylan McEvoy added two firsts to his string of 4.7 wins.

More photos from the Laser Frostbite Series in the Gallery