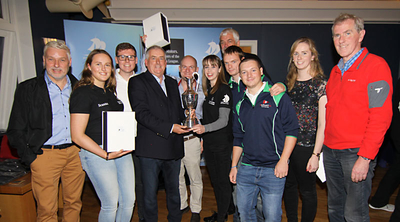 Whilst the autumnal ‘Storm Brian’ and the resulting wind conditions conspired to cancel racing for the final day of the MSL Park Motors Autumn League, some clever scheduling in the previous six weeks enabled competitors to complete six races in HYC’s ‘flagship’ autumn regatta.

Led by International Race Officer and event PRO David Lovegrove, the race management team prudently took the step on Saturday morning to cancel all racing for the day.  Having anticipated their decision,  Commodore Joe McPeake and event organisers Susan Cummins and Mossy Shanahan had put in place a plan that would lift the spirits of those disappointed sailors who would not be racing. Supported by an immediate social media campaign, the word got out that complimentary food and some special bar promotions had been put in place, much to the delight of the hundreds of sailors who had doubtless  realised an inevitability in respect of the forecast.

The teams that had topped the leaderboard on the previous weekend could now relax with the knowledge that they would be the trophy winners. Fuelled by an afternoon of club hospitality, the prizegiving was no anti-climax and was conducted by the Commodore and MSL Park Motors’ Dean Fullston and Brendan Grace, who were all delighted to see a packed clubhouse for the prize-giving, dinner and late night entertainment.

Thanking MSL Park Motors Mercedes-Benz for their support of the event, Commodore Joe McPeake also presented Dean with a special Dublin Crystal momento from the club.

The Heineken Trophy for the overall event winner went to the Murphy/ Costello’s Puppeteer 22 ‘Yellow Peril’, following their superb results in one of the largest fields of the 9 competing classes. Their boat was also part of the winning team that secured the Olympus Team Trophy, winning that team prize with Serena Blacoe’s Squib ‘Seabi Scuit’ and the K25 Team on their J24 ‘Scandal’.

Event organiser Mossy Shanahan said of the event: ‘Feedback from competitors would demonstrate that this year’s Autumn League was a tremendous success. The quality of racing was supported by HYC’s world class race management team and the overall event was brilliantly complimented by a ‘new look’ hospitality offering on shore.’ When asked about the weather and how the format catered for the expected challenges at this and any time of the year, Mossy said: ‘Our strategy was to give competitors the best possible racing, maximising value and without compromising quality. The fact that we managed to get 6 great races out of a possible 7 completed for all classes is testimony   to the quality of the teams that we have in place. Neither Hurricane Ophelia nor Storm Brian could damage this Autumn League.’

Many of the boats will be lifted out over the coming 10 days, but it is expected that the success of this year’s Autumn League will reflect in a growing interest to complete in the upcoming Brass Monkey Winter Series - an event that now also caters for IRC entries. See here