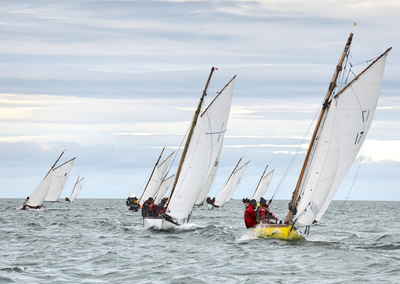 This week and for the second time, HYC's Autumn League race management teams were presented with and efficiently managed the considerable challenge of running two races for the inshore and offshore fleets. Aided by some slight alterations to the sailing instructions, Howth’s rich cohort of race officials set out windward-leeward courses for the first race and into a north-westerly 18-20 knot wind that accommodatingly behaved in terms of direction and strength for the whole afternoon.


The teams on the race committee vessels (Sea Wych, Star Point and six accompanying RIBs) finished the nine racing classes, then laid a ‘Round the Cans’ course and got all 100 boats cleanly away for the second race by 4pm. The decision to move to a ‘Round the cans’ course for the second race meant that both fleets finished in Howth Sound and in plenty of time to enjoy the revelry ashore.


With more than four races now completed, boats now discard their worst score and many of the leaderboards tighten as a result. The notoriously cluttered sailing calendar conspired against Class 1 this weekend, with the J109 National Championships clashing with the Autumn League, but culminating in sweet success for Pat Kelly’s ‘Storm’ (See here). But the Breen/ Hogg/ Gregory partnership on their First 34.7 ‘Flashback’ were quick to take advantage of the absence of the J109s, winning both IRC races and really stirring it up at the top of the Class 1 leaderboard. Stephen O’Flaherty‘s Spirit 54 ‘Soufriere’ now commands a formidable lead at the top of the ECHO division, following two wins. The standard of racing and level of competition continues at breathtaking pace in Class 2. The X-Boats, Half-Tonners and Corbys continue to jostle for dominance of this class and while Dave Cullen's ‘Checkmate XV’ earned the right to top this division after winning the second race on Saturday, the Half-Tonner was beaten in the first race by the Wright/ DeNeve/ Cronnelly team on their Corby designed ‘Kodachi’. Jonny Swan’s Half-Tonner ‘Harmony’ leads the ECHO division.

Having missed the first race because they were competing in the J24 World Championships in Canada, the Howth K25 team on ‘Scandal’ capitalised on their discard this week and won both races, leapfrogging their way to the top of the leaderboard in Class 3 IRC. However they will have to stay on top form to fend off the challenge from Gerry O’Sullivan’s Formula 28 ‘Animal’ and Autumn League veteran Vince Gaffney and his team on ‘Alliance Eleven’. The same three boats dominated the ECHO division for the first race, but the resulting adjustment of ratings presented an opportunity to Lionel McMurtry and his team on ‘Hellyhunter’, who won the second race by a minute on corrected time.


It seems like business-as-usual at the front end of Class 4, where Colin Bermingham’s ‘Bite-the-Bullet’ is a familiar sight at the top of the IRC division. But he’s not having it all his own way this time, with the Harris/ Hughes First 40.7 ‘Tiger’ snapping at his heels with only seconds separating them in some of the races and only one point between them in the overall stakes. The ECHO division in Class 4 would be a bookmaker’s challenge but the Burrows/ Skeffington partnership on their Sigma 38 ‘Spellbound’ seem to have found the secret, topping the ECHO leaderboard - by consistently scoring in third and fourth place, their rating changes very little after each race in comparison to the rest of the fleet and any continued gradual improvement should see them as favourites for the ECHO title. The Class 5 boats ‘centre of interest’ is in the ECHO division, where 12 boats are battling every week and where the additional rating points added to Terry McCoy’s ‘Out & About’ after winning the first race, didn’t stop their relative performance and they managed to beat ‘Baily II’ by 13 seconds in the last race. Only 5 boats compete in Class 5 IRC and Windsor Lauden and Steffi Ennis’s Club Shamrock ‘Demelza’ continues to dominate, although this time the 13-second gap in the last race went against the team on ‘Out & About’, finishing second and lying second overall in that division.


The ‘Taste of Racing’ teams on the club’s J80s continue to enjoy thrilling racing as they hone their skills in the club’s assymetric-rigged keelboats. Three boats took part this week, including teams from Intel (skippered and mentored by Fergus O’Kelly) and Accenture as well as a training squad mentored by Noel Davidson. The ‘Taste of Racing’ programme is designed to introduce new sailors to the sport and offers them all a chance to try all positions on the boat during a race. This gives them valuable experience, provides a transition from basic sailing skills through to competent racing experience and as a result, last year’s participants are now all racing on members boats.


Neil Murphy’s ‘Yellow Peril’ is demonstrating consistent results in the large Puppeteer class, but dealing with some tough competition from experienced teams on Dave Clark and Liam Egan’s ‘Harlequin’, Alan Pearson and Alan Blay’s ‘Trick or Treat’ and also from Scorie Walls and Declan Browne’s ‘Gold Dust’, which suffered a main halyard failure on the way to the start line, but managed to recover to consolidate 3rd place overall. There was less luck for ‘Trick or Treat’ and their team who retired after finishing and will be looking for two strong results to challenge ‘Yellow Peril’ before the approach of Halloween and finish of the series! Only half a point separates the top three in the Puppeteer handicap division, to the benefit of Frank Dillon and his team on ‘Flycatcher’, so they will need to be on top of their game to stay in front with two races to go.


The strong winds and forecasted gusts convinced all but two of the Squib class not to race this week and Serena Blacoe’s ‘Seabiscuit’ and Ronan MacDonell’s ‘Fantome’ did the honourable thing by sharing the spoils, winning a race each. ‘Seabiscuit’ has the honour of being the first probable Autumn League winner after only five races, but will no doubt be battling on to contend for the overall event prize.


Not one of the 16-strong Howth Seventeen class took the risk to hoist their topsail in the fresh conditions as they rigged up in the harbour on Saturday afternoon. Probably a wise move because it was a day for maximum ‘weight on the rail’ for every competing class. Mike Toomey and his team on their Howth Seventeen ‘Deilginis’ took full advantage of their season-long form and won both races, moving to the top of the leaderboard ahead of Brian and Conor Turvey’s ‘Isobel’, now separated by four points. Some consistent racing by the Doyle, Walsh, Finnegan trio in ‘Bobolink’ affords them a slim lead at the top of the handicap division from Harriette and Bryan Lynch’s ‘Echo’ and the jointly chartered ‘Erica’ (Hansen/ O’Meara/ Gilna).


As a consequence of the close quarter action on the busy racecourses, the protest room was in full use on Saturday until almost 9pm, and the hearings were generously overseen and managed by chairman Ed Alcock and supported by Kieran Barker and Rima Macken.

As the leaders emerge in each class and following the busy evening ashore after racing last Saturday, it’s certain that the final two days will be lively affairs. Don’t forget to book your seats at the final night dinner in the club. See here. Daily race winners have been notified of their personalised MSL Park Motors Mercedes-Benz shirts and can collect their prizes from the MSL team next Saturday.