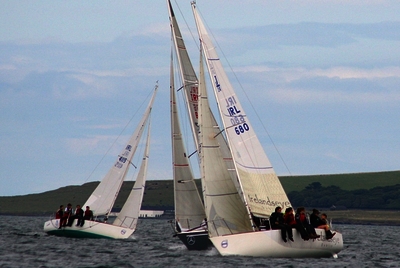 Many of Howth’s regular cruiser-racing keelboats took part in and enjoyed the racing and hospitality at  Malahide Regatta last weekend. In Class 3 it was a clean sweep on IRC for Howth Yacht Club boats, with Isabel Cahill’s Kilcullen K25 team leading the way with a 1st and a 2nd ahead of Starlet and Scandal. Malahide Sailing Secretary, Brian Stewart’s Mon Reve was a popular winner on performance handicap.

In the 8 boat Class 2 Mark Patterson & Kevin Darmody’s Viking also won their class on IRC with a 1st and 2nd ahead of Mojo & Toughnut. To underline their form on the day, Viking also won on performance handicap.

There was some very competitive racing in White Sails between Indulgence, Spellbound & Mystique. However, former MYC Commodores Roger & David Greene demonstrated the importance of paying attention to sailing instructions and flags to win the class with a 1st & 5th on Calypso.

The results for performance handicap were based on a boats performance at open and club events over the past year rather than their standard Echo handicap. This system provided close racing across all classes and some race winners from outside the usual front-runners. It is intended that a similar system is to be adopted for the upcoming MSL Park Motors Mercedes-Benz Autumn League.