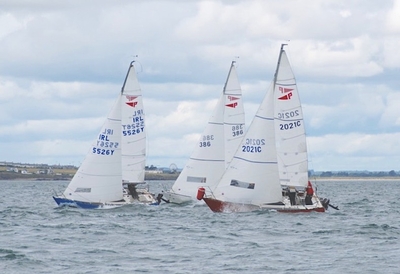 Howth Yacht Club hosted the Sutton Cross Pharmacy Puppeteer National Championship, attracting 14 competitors over the weekend of 29th and 30th July, in strong wind conditions. Wind on both days behaved and six races were run in mostly sunshine but there were a few small squalls in the final two races on Sunday.

By the end of the first day, the wind had picked up and with a lot of tired faces, Trick or Treat, Gold Dust, Eclipse set the pace early in the competition. Harlequin, Gannet (HYC K25 Team), Yellow Peril and Blue Velvet show determined intention to be in contention on the second day. Ibis, Papagena, and Ghosty Ned keep a near enough score not to be left out of the final count. Shiggy, Geppetto, Mojo and Weyhey all made their intention known in making a determination for the handicap prizes. Sunday, day 2, with strong winds and some squalls, saw Blue Velvet (Colin & Kathy Kavanagh) take two firsts and a second to come first overall with 12 points followed by Gold Dust ( Scorie Walls and frank Browne) in second on 13 points, Eclipse (Andrew and Robin Hegarty) third again on 13 points and Trick or Treat (Alan Pearson and Alan Blay) in fourth on 14 points. With only one point between all places this shows a great indication of the close competitiveness and good racing of all the Puppeteers and crew.

The Puppeteer Handicap fleet was lead home by the very competitive Shiggy (Gerry Kennedy) in first place follow by Weyhey (Michael McKeon) in second and Gannet (HYC K25 Team) in third and Yellow Peril (Murphy and Costello) in Fourth. At the end of the day, competitors were presented with their ISA medals by Vice Commodore Emmet Dalton and cheered by their fellow competitors. 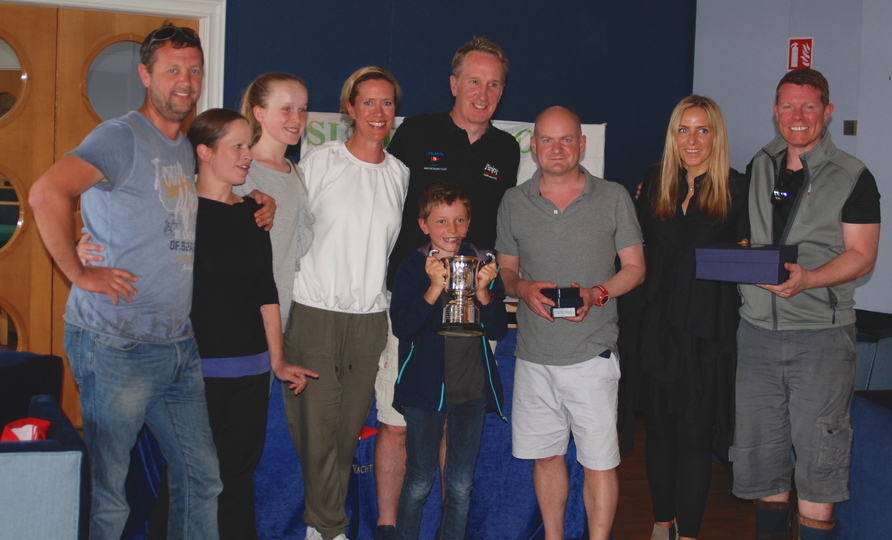 The continued support of Sutton Cross Pharmacy, a long-time partner of HYC, was acknowledged by the Vice Commodore and by the new National Champion.

Special thanks must go to the Race Management Team under Race Officers Harry Gallagher who ran a perfect national. Lastly, but by no means least, our appreciation goes to the Protest Committee (Emmet Dalton and Serena Blacoe) and Christine Kerley for outputting results in the usual efficient manner.