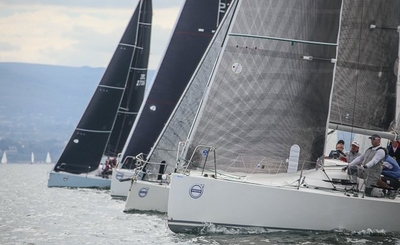 Volvo Dun Laoghaire Regatta came to a gentle close on Sunday after four days of racing in Dublin Bay with over 475 boats and almost 2,500 sailors competing. A light sea breeze of six knots allowed the race management teams (including a large team from HYC) to complete nearly all 290 scheduled races with many class titles hanging on the outcome of the final race. In a fitting tribute to the harbour's bicentenary year, racing for the coastal classes finished inside the harbour, a nod to a long-standing Dun Laoghaire yachting tradition and reinforcing the message that the harbour should be continued to be used as a leisure amenity.

Whilst the four host clubs (NYC, RStGYC, RIYC and DMYC) shared 23 of the overall prizes, 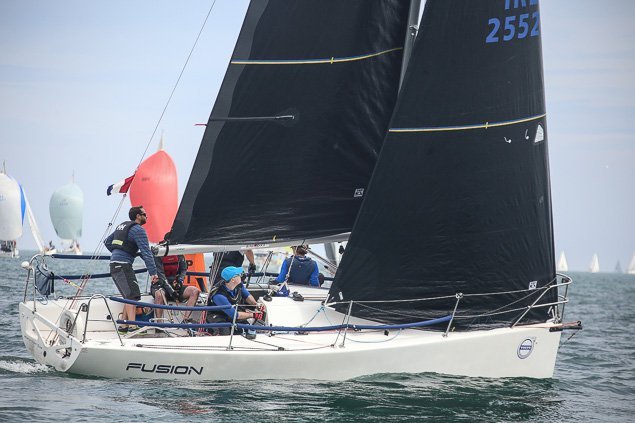 Howth boats showed their prowess by taking 7 of the main titles back across the bay. Richard Colwell and Ronan Cobbe's Corby 25 'Fusion' was in formidable form, winning seven of their nine races in Class 3 and on a start line that looked very 'northside' with four Howth X302s and the other Corby 25 'Impetuous' all hoping in vain for a slip by Richard and his team.

Class 2 (top photo from Afloat.ie showing 'Lambay Rules' in the foreground and 'Kodachi' pale blue bow forward) was another Howth-dominated affair and one that saw fierce competition for the five HYC teams that finished in the top 7 of the 17-boat fleet. Dave Cullen's Half-Tonner 'Checkmate' seems to have laid a marker ahead of the Half-Ton Cup next month, having won 3 of the final 4 races this weekend and finishing one place ahead of the other Howth Half-Tonner - Jonny Swan's 'Harmony'. 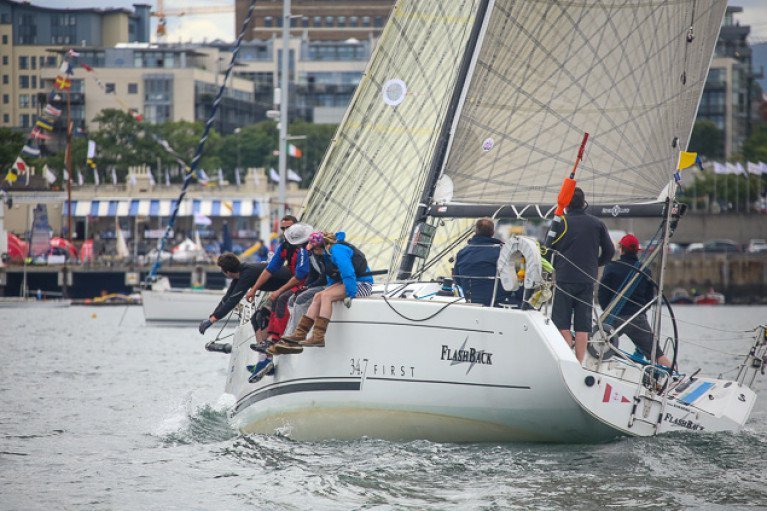 The large 31-boat offshore prize was won by Howth's Paddy Gregory and team in their Beneteau 34.7 'Flashback'. Paddy and Don Breen also lifted the Royal Dee Offshore Championship Trophy that was raced as part of the regatta. Their boat surprised many of the opposition (but not anyone who has been watching their form) but was on the radar from the first race that they were the ones to beat. Only the consistent form of the highly competitive J109s 'Jedi' and 'Mojito' as well as third placed J122 'Aurelia' thwarted the 'Boat of the Regatta' from Paddy and the guys.

Other wins by 'Dux' (Class 3 ECHO), 'Bite-the-Bullet' in Non Spinnaker, Class 5 ECHO win by 'Challenger' and and impressive 1,1,1,1,2 by the Howth 17 'Isobel' ensured that HYC secured the largest collection of silverware of any of the competing clubs from its 36 competing entries, representing 20% of all visiting competitors.

Applaud should also be given to the HYC 'Try Racing' teams in the club-owned J80s who competed in their own class and also in the Mixed Sportboat class and also to those HYC juniors who were given the opportunity of racing in the J24s 'Kilcullen' and 'Scandal' - many of these sailors were competing in a big keelboat regatta for the first time.

The biennial event is being hailed an enormous success both afloat and ashore for a combined fleet of 475 boats and including 9 class championships. Over 290 races on five different courses were staged in a range of light to medium conditions since racing began last Thursday.