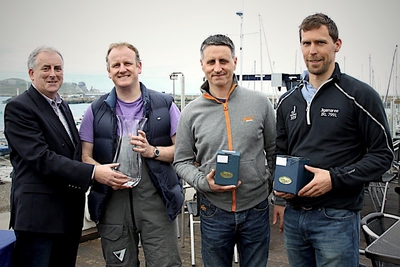 The SB20 Eastern Championships was held in Howth Yacht Club over the weekend of the 22-23rd of April. A fleet of 16 boats arrived at the start line on Saturday morning to commence an extremely hard fought and competitive series. Despite a forecast for light and shifty winds, a reasonably steady breeze gave us 3 good races on the Saturday efficiently run and set by race officer Paddy Judge and his team. Three different winners of the Saturday races meant that only 3 points separated the top 3 boats with early pace setter Colin Galvan leading ahead of Michael O’Connor and Peter Kennedy.

Sunday began with a postponement due to lack of wind but after an hour the fleet launched and the breeze built to a perfect strength for racing. Colin Galvan won the first race looking set to put a hand on the title with Darren Martin on his heel in second and Michael O’Connor in third keeping it tight at the top. Race 2 saw O’Connor win with Martin second and Peter Kennedy coming third, with Galvan having a 7th it was now anbodies championship going into the last race. Race 3 saw Peter Kennedy win with Darragh Sheridan second and Ger Dempsey third. A fourth in the last race gave Micheal O’Connor the overall win topping a table that had only 3 points between the top 4. The overall placings were 1st Michael O’Connor, 2nd Peter Kennedy and 3rd Colin Galvan with Marty Cuppage winning the silver fleet. On behalf of the class I would like to thank HYC for hosting an excellent event with special thanks to Paddy Judge and his team for their superb work on the water.