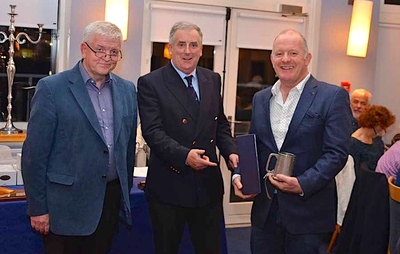 The annual Puppeteer dinner and prize giving was held on Friday 27th. January.  Unfortunately some of the regulars were away and only 16 boats were represented, however there was still a good attendance of just under the 100 mark and all had a great night.  The catering and service were first class - thanks to Jason and his team for an excellent meal and also to the bar staff on the night.

New Commodore, Joe McPeake, gave a brief update on developments in the club and future plans.  The class used the dinner to thank the sponsors of their National Championships - Sutton Cross Pharmacy.  Also in attendance was their Race Officer for the Championships - Harry Gallagher, and honorary Puppeteer photographers - Conor & Monica Lindsay.  An array of prizes were awarded across the fleet with no less than 18 boats called up to collect something on the night as befits one of the most competitive and largest racing classes in HYC.

This year, after the meal, the class went with "low level" background music.  This went down well with people socialising and chatting at tables into the small hours.  The class is really looking forward to another highly competitive season ahead.

See the full set of prizegiving photos by Conor Lindsay