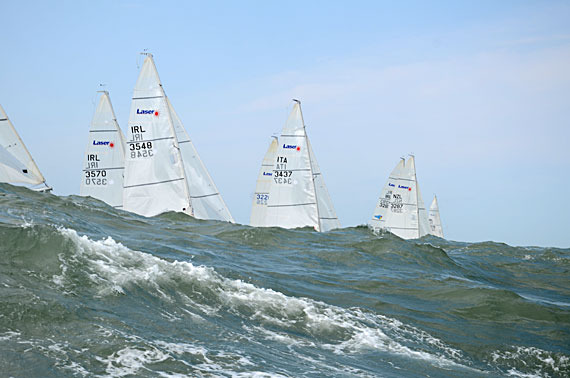 The final weekend of the Key Capital Spring Series was a testing one, coming so early in the season. The blustery conditions meant thrills and spill in equal measure for all classes.

Class 2 saw the continued dominance of the lone Etchells in the fleet with Stephens O' Flaherty and Quinn scoring another two bullets to complete a perfect score of six wins. In second was Paddy Kyne's Maximus followed by Noonan and Chambers on Impetuous. The SB20s saw Michael O'Connor take the overall win after a great battle with Davy Taylor on Yachtsman.ie. Third place went to Dinghy Supplies and Shane Murphy. The SB's in particular appeared to enjoy the burns downwind.

In the J24 class Martin Reilly took the overall honours. This was all the more remarkable as they did not sail on the first weekend. However a perfect score of four firsts gave them the overall victory. They were followed by Scandal (B. Mc Dowell) in second and Emmet Dalton completing the podium places.

The J80s saw some tight racing as they included a number of crews preparing for the qualifiers for the Women's match racing event coming up in Cork later this year. The winner was Simon Rattigan followed by Jill Sommerville and Karena Knaggs in second and third respectively. The final weekend also included the running of the Royal Alfred Niobe Trophy. We were joined by the Puppeteers for this event which was won by Robin and Andrew Hegarty followed by Scorie Walls.

We were delighted to welcome Shane Gill from our sponsors Key Capital Private to the club to present the prizes. A huge thank you goes to Shane and Key Capital for their fantastic support. A big thank you to Richard Kissane and his team on the Committee boat for an expertly run six races. Also thanks to Cillian Mc Greer and his teams on the rescue boats and to Fred Connolly and the guys on the marina.