A mini cruise in the Med on La Lumiere of Howth 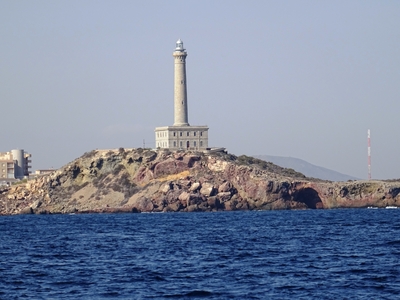 A cruising log from the Mediterranean by Carmel Kavanagh on board La Lumiere of Howth: 'Whereas most of our cruising friends in HYC have bagged their sails, doubled up their lines and plugged in their dehumidifier in preparation for winter, the cruising season is far from over down here in Torrevieja! We have just returned from a 6 day cruise of our local area which was most enjoyable most of the time! The weather was warm and sunny with light to moderate winds which meant we could actually sail to our destinations for a change.

On Friday, 14th October, we sailed 10 miles down the coast to San Pedro del Pinatar in a nice north easterly breeze. Upon arrival, we were told there were no berths available which was quite astonishing as there are two marinas in the port. (We think the marinero in charge was simply too lazy to deal with the paperwork necessary for checking into a marina in Spain!)

By the time we had finished unsuccessfully trying to persuade the marinero to give us a berth, the wind had veered round to the south and strengthened so we decided to go with it and sail back to our berth in Torrevieja much to the amusement of our Dutch neighbours to whom we had bid a fond farewell earlier in the day!

Undaunted, we set out again the following morning and this time headed for the Mar Menor which is 15 miles to the south. The Mar Menor is an inland sea 12M in length by 6M wide and can be accessed from the Med via a canal which is spanned by a road bridge which opens every two hours on the hour from 0800 to 2200 at this time of year. Once again, we enjoyed a pleasant sail down along the coast arriving at Punta del Estacio for the 2pm opening of the bridge. We proceeded through and entered the Tomas Maestre Marina on the left where we were made very welcome indeed – in sharp contrast to our experience the previous day! 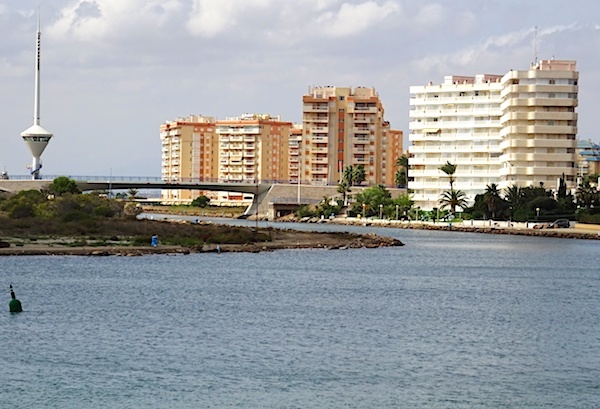 We spent two delightful days here exploring the Mar Menor by land (on our new folding bikes} and of course by sea. The peace, tranquillity and lovely warm weather we enjoyed during our short stay were memorable although it is rather a strange place. There are miles and miles of apartment blocks built along the narrow stretch of land which separates the Mar Menor from the Mediterranean; at certain points there is no more than 100 metres between the two seas. In season it is obviously a very major holiday resort but in October it was delightfully un-crowded!

On Monday 17th October we headed back out into the Med and down to Cartagena which is 25 miles from the canal entrance. Once again, after rounding the Capo de Palos, there was sufficient wind from the right direction to enjoy a pleasant sail down to this most interesting destination. (See photo of the imposing lighthouse at the top of this report)

Apart from being a major naval port, Cartagena is steeped in history and archaeology. In 223 BC it was renamed Carthago Nova when Hasdrubal and his army invaded and settled in it after departing  from their base in Cartagena in North Africa.

During our 3 days there, we visited the Naval Museum, the beautifully restored Roman Amphitheatre, a most interesting Maritime Archaeological Museum, the Castillo de la Concepcion high above the city and the old walls of the city from the Punic era – all within walking distance of the marina. 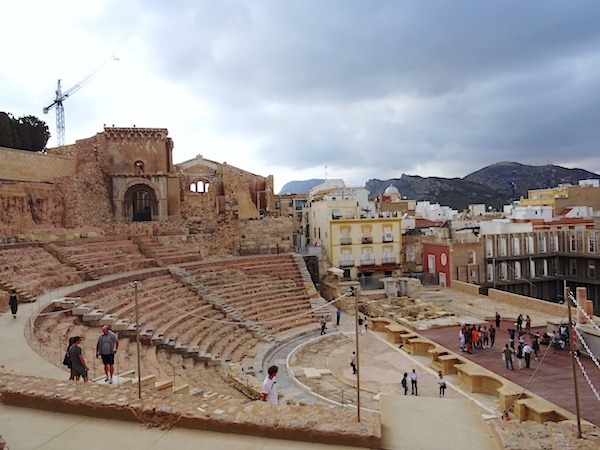 There were many other magnificent buildings in the town to admire such as the Town Hall itself and various other private buildings in the historic quarter. There is so much to see and enjoy in Cartagena that we will definitely make a return visit and the marina Yacht Port Cartagena was also a friendly welcoming place to stay. 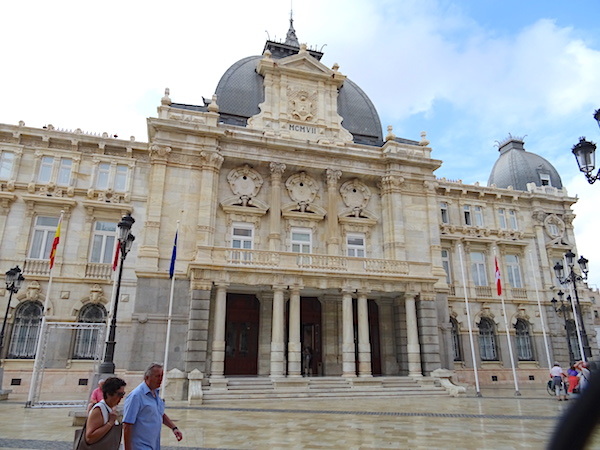 Unfortunately the weather forecast began announcing that a bad weather front was on the way and because of some commitments in Torrevieja over the weekend, we decided to depart this impressive city a few days earlier than planned.

On Thursday 20th, we awoke to a dense fog which delayed our planned 0900 hour departure for close to 3 hours. When visibility had increased to approx. 3 miles we decided to head back up to Torrevieja which is about 40 miles north of Cartagena. We motored against wind and current to Capo de Palos but once round it, we were able to set the sails and a course for Torrevieja with the engine at rest!

All went to plan until we were about 45 minutes out from Torrevieja when we noticed a particularly malevolent looking sky heading out over us from the land. We dumped the sails, donned the wet gear, cleared the cockpit and decks of all movable objects and waited to be hit by one of the worst thunder and lightning storms we have ever encountered while out at sea in the Med. On two occasions the bolts of lightning struck the sea too close for comfort. However, after 15 minutes of torrential rain, claps of thunder, bolts of lightning, it passed over and suddenly the breakwater of the Port of Torrevieja was just ahead. Allelulia!

A trusty marinero was waiting at our berth to take our lines and was delighted to note that both ourselves and the boat had come through this very nasty storm unscathed.

All is forgiven as once again it’s all lightness and sunshine in this lovely corner of the world!' 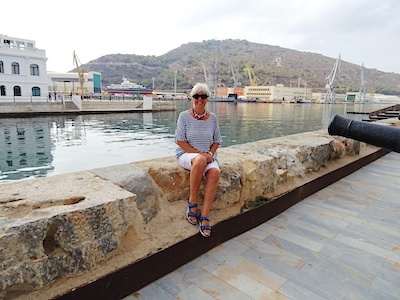