Report from the Laser Nationals in Galway 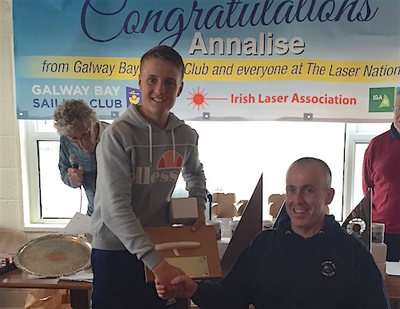 Howth Yacht Club was very well represented by sailors in all fleets at the 2016 Laser National & Ladies championship in Galway Bay Sailing Club last weekend. The 4.7 & radial sailors had two days of preparitory training with Sarah Gunni from Denmark on the Monday and Tuesday in the club before the event. Sarah flew in from Tallinn in Estonia where she had been coaching the Danish National team. She hit the ground running giving our sailors fantastic coaching in the lead up to the Nationals. Sarah was not alone in coaching the HYC sailors as the McMahon family sailors Ewan, Jamie and Eve had their own dedicated coach at the event from Sailcoach in Malta.

On day 1 of the event HYC sailors blasted off the startline in the light air conditions. Our own Shane O’Brien won the first race in the 4.7 fleet by a good 10 boat lenghts leaving his competitors scratching their heads in as they tried unsuccesfully to catch up !

Unfortunately this was the only race to be sailed that day and although the next race was started and half the course sailed it was then abandoned much to the frustration to the HYC sailors who were leading all the fleets.

Day 2 and 3 of the event were not sailed due to strong winds. Miserable faces could be seen all around the club as parents counted the cost of the 4 days in Galway and the sailors wondered about the quality of a champiosnhip with so few races.

On day 4 of the championship 4 races were due to be sailed but unfortunately only 3 were completed in medium conditions and driving rain. Paul McMahon in the standard rig fleet won the last race of the day and finished in 3rd overall. In the 4.7’s Jamie had a great day winning 2 out of the 3 races and is the new 4.7 National Champion. In the radials Ewan recovered from his UFD on day 1 to score two seconds and finished the championship in 2nd place unfortunately 2 pts off ISAF qualification which went to Johnny Durcan. In the girls fleet Aoife rounded off the day with a 4th and was also pipped for the ISAF spot by 3pts. Indeed the racing was so tight had the discard not been applied the spot was hers. Both sailors were left wondering what might have happened had the full quota of races been sailed. However the relief on some of the parents faces was evident as  they had wondered about he wisdom of a trip to New Zealand in the middle of Leaving Cert year !

Max Kavanagh new to the laser fleet finished the day with an outstanding 6th place in the final race and Eve McMahon (probably the youngest competitor) concluded the championship with an excellent midfleet result.

Richard Hogan having had a break from sailing to focus on his Leaving Cert made a very strong comeback. Richard will be making Galway his new home as he accepted a place in medicine in Galway University the day after the Nationals. Well done Richard and the best of luck in the future!

HYC sailors can be proud of the results that they obtained at the championship and are a testament to their hardwork and commitment. The fantastic race practise that they get at the frostbites every winter no doubt played a strong part.

Results for the sailors sailing under the HYC burgee are below.

See below Jamie McMahon's report on his Laser 4.7 Nationals win in Galway:

'The 2016 Laser Nationals was hosted by Galway Bay Sailing Club in Oranmore ,18th -21st Aug. I had high expectations for big winds and a lot of rain judging by Galway’s reputation. I knew very well that this wasn’t going to be an easy event  for me because I was new into the class and more experienced sailors would be more able to sail well in any conditions, be it heavy winds or light, big waves, or flat calm.

The first day was 4-6 knots and very shifty. The course was set but the wind started to die and that made things extremely tricky for the race committee. After a lot of waiting for the wind to pick back up, they managed to get in one race  and  although they tried for a second race, the wind wasn’t playing ball resulting in a big shift and the race being abandoned.

The light wind didn’t last long as the second  and third days were cancelled after long waits in the sailing club because it was gusting over 30 knots and wasn’t due to die off.

The last day was better conditions even though the race committee changed the first gun an hour forward to make sure they got in three races to make an event! It was windier than was forecast and the breeze was steadier. Going into the last race I had two firsts and I just had to beat one guy to take first place. I had an eighth to fall back on from the first race but I knew that might not have been enough so I was racing my socks off for a good result.

After the start it was over 20 knots and it was all about speed because the course was set very well. As me and a few others around me started to punch out of  the fleet it shifted a bit right which left me tenth around the windward mark. After  trying to catch up for a good bit of the race I came out fifth going on to the last, but short upwind and I knew  then that I had done it. I was first overall but I wanted to make sure so I put everything into the last upwind and finished the race in third and then I knew for sure I was national champion in the 4.7 fleet 2016

I would like to take this opportunity to thank all the event organisers and the event sponsor (CH Marine) as well as all the volunteers and my fellow competitors for making the championship such a success.'