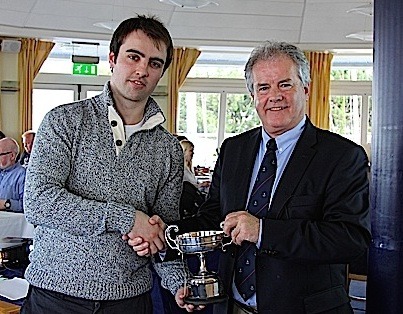 Ronan Cull is presented with the first prize for winning both the winter and spring series.It was touch and go for a while, whether or not we would get out sailing today let alone around the island. Windguru's last minute changes to the forecast proved a little unsettling, as we looked out from the shore. Despite the forcast we had a deluge of Radial and 4.7 entrants, as the Youths came down to put it up to the Standards! After a briefing at 10am and one amendment to the SI's, we launched for a tough day's racing.

A total of 31 boats hit the water in a fresh 17kts. Race 1 got away with a clean start with a strengthening ebb tide. Daragh Kelleher powered in from the left layline to lead from the chasing pack. Some powerful gusts made for spectacular reaches and dicey gybes. The wind strengthened slightly as the race progressed and 50 minutes later Kelleher took line honours after a marathon race.

Race two got away in slightly more wind, but this time a shorter course. Again the left side paid, but many overstood on approach due to the tide. This was a much tighter race as the lead changed multiple times. Garrett Donnelly was having a great day in the breeze, as he powered down the reaches. Stephen Quinn managed to overhaul him to take the gun.

Race three started in gusts over 25 knots, with an individual recall after a couple of sailors getting caught out with the tide and starting early at the pin.The 4.7's came into their own taking two of the top five places at the windward mark. The breeze was pumping at this stage with many going for a swim. A very shortened course saw this race end after only one lap.

A tough day on the water with many lessons learned ended a tough frostbite series followed by a well deserved Laser Lunch. Many thanks to all the volunteers throughout the series and well done to all the prize winners. See photos: here