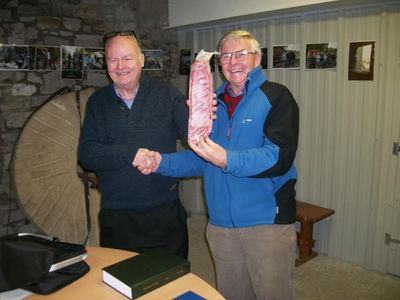 The ROMEOs (Retired Old Men Eating Out) will conclude their 2015/2016 programme of outings on Thursday 7th Apri,l when a contingent of them will invade Cúchulainn territory in Cooley by way of Newry, Omeath, Carlingford, Rockmarshall, Jenkinstown and Bellurgan.

Their February outing was a visit to the Martry Mill, a fully functional watermill on the River Blackwater, near Kells in County Meath. The Tallon family have been producing stoneground wholemeal flour since 1859 although the earliest recorded working date back to 1641.

They supply bakeries, supermarkets and shops around Meath with their wholemeal flour and supply directly from the mill. They are open for tours if you want to see the flour milling process and learn about the history of the historic listed building contact James Tallon, 086 8173205, address; Martry Mill House, Kells, Co. Meath, Email: hello@martrymill.ie web; www.martrymill.ie. Prior to boarding the bus for the return to Howth a very pleasant meal was consumed in the nearby Martry Restaurant.

The March outing on Wednesday 9th began with a very early rising for a flight to Bristol. On arrival, the pre-arranged bus brought us the 45 minute journey to the Royal Navy Fleet Air Arm Museum in Yeovilton, Somerset. The Museum has replica exhibits going back to 1909. A replica of the Short Brothers 1911 S27 represented the first fixed wing aircraft flown by the Royal Navy in 1911. Another early replica was the Sopwith Pup, it was a scout aircraft in 1916 and was the first aircraft type to land on the deck of an aircraft carrier. An extensive tour through the various decks and working of an aircraft carrier was very interesting and informative.

Report and pics by Pat Murphy