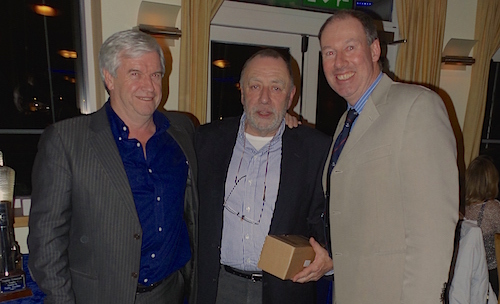 The Class 2 and Non Spinnaker Classes held one of the largest celebrations in the club this year with their combined prize-giving dinner on Friday night. 150 members of the classes and their guests enjoyed another superb serving from caterer Jason and his team, while keeping the bar staff busy for the night.

The Class 3 prizes for 2014 club racing were evenly distributed with the only exception being Class 3 captain (and event organiser) Eddie Bourke and his team on Starlet winning the IRC silverware for two of the four series. Colm Birmingham's Bite the Bullet did much the same, winning Season Overall for IRC in the Non-Spinnaker Class with Kevin O'Byrne and team on Mary Ellen collecting four of the HPH prizes but not enough to beat the McCabes' Arcturus, who won the Voyager Trophy for Season Overall HPH.

See all the 2014 results here: hyc.ie/club-racing