Report from the Gaes Christmas Race in Palamos 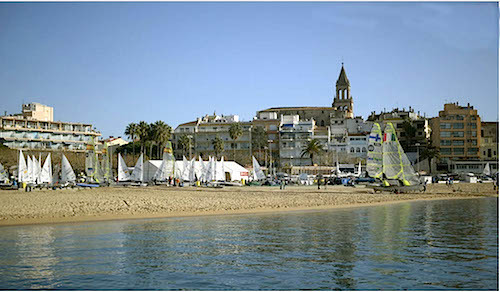 Sailing on behalf of Howth Yacht Club were Robert Dickson/ Sean Waddilove and Colin O'Sullivan crewing with Doug Elmes (RCYC) on their 420s and Aoife Hopkins in the Laser Radial. The event was defined by light shifty wind conditions and flat seas. Two locations were used for launching with the Lasers launching from the beach in Palamos and the 420's launching from Club Vela Nautica slipway. There were 4 race courses in total with the 420's and 29er's sharing a course and the three Laser fleets also sharing a course.

Day one was a day of mixed results for the HYC sailors. Aoife disappointingly scored a 16th in race one as the wind shifted from one side of the course to the other but made up for it in race 2 by scoring a 3rd narrowly beaten on the finish line by the Ukrainian Gumenko and beating the 4 Olympians sailing in the women's laser radial fleet.

Over on the Charlie Course racing was abandoned for the 420's after one race.

On Day two the wind once more failed to materialise and after a long postponement 2 races were sailed in all fleets. Aoife scored two mid-fleet results with an 11th & 14th. The 420's sailed 3 races to make up for the race lost the previous day after a 26th & 21st Robert & Sean scored their best race of the regatta with a 6th in their final race of the day and Colin and Doug were black-flagged in one of their races but remained high on the leaderboard. 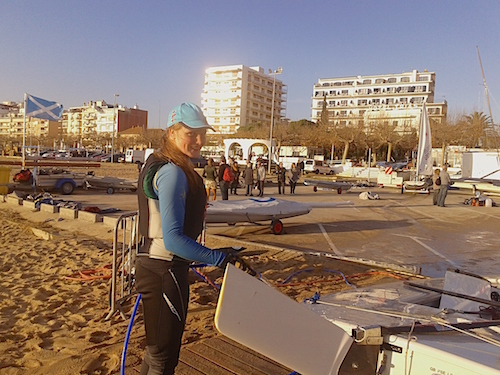 On day three Aoife finished midfleet in race one and in race 2 after a 50 degree wind shift found herself at the back of the fleet and had to work had to gain places eventually finishing in 18th, she followed this with an impressive 4th place determined to go home with a good result! The 420's sailed 3 races but the Waddilove-Dickson team fell foul of the U flag on the third race. The Elmes-O'Sullivan team consolidated on their results and ended the day as the highest placed Irish team and in 12th.

All the Irish sailors looked forward to day four as wind was promised which would mix up the results. Aoife was in 12th position and needed to make up 7 points to qualify for the medal race (top 10) but with 3 races planned she was optimistic. Unfortunately day four dawned with bright blue sky and sunshine and not a puff of wind! Races were postponed and eventually cancelled for the day.

The medal race was planned for day 5 of the regatta but with the Irish sailors out of the running they packed up their boats and headed out for a relaxing evening of socialising with the other sailors. There was no wind for the medal race which also had to be cancelled.

The Christmas race in Palamos was a great experience but more wind would have been appreciated.