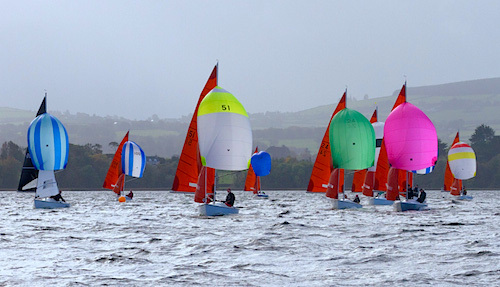 Five fleets; Dragons, Squibs, SB20s, Flying Fifteens and J24s descended on Lough Derg YC last weekend for the season-ending Keelboat regatta. Most fleets travelled facing a very bleak weekend forecast. Two Howth Boats, Fantome (Ronan MacDonell) and Shillelagh (Gus O’Kelly) left HYC in miserable conditions on Friday lunchtime and arrived in conditions worse still. The boats were rigged and launched within 45 minutes of arrival which was testament to the efficiency in LDYC and also to our desperation to get dry with pint in hand. Squib sailors countrywide travelled in greater numbers with 27 boats entered. The Dragon and SB fleets were approximately 15 each with smaller numbers of Fifteens and J’s.

The Dragon fleet began their series in 20 knots on Friday getting two races completed. The remainder of the fleets began their campaigns on Saturday morning with four races scheduled. Two courses were planned with the fleet of 27 Squibs having their own race track slightly further inshore. Conditions on the water on Saturday were difficult with prolonged squalls with the race officer recording gusts of 35 knots during the day. Most boats left the marina to go racing but many very promptly returned to the comfort of the shore. 14 Squibs stayed out and the race officer and his team succeeded in getting three races completed by 2pm and allowing the tired crews the rest of the day off. Overnight Shillelagh was in 7th place and well positioned for day 2 while Fantome sat 10th overall. Racing for all other fleets was abandoned much earlier in the day with no races sailed and rumour has it that the Dragon fleet had a meeting on the dock and refused to go sailing at all. With the day that was in it gear failure was sustained including quite a few broken rudders.

On Sunday sailors were greeted with similar windy conditions. While a number of crews opted to remain in bed all fleets went sailing. However, the regatta ended prematurely for Howth Squib sailors. Shillelagh broke an outer shroud on the way out to the race course and had to nurse herself home for repairs. Unfortunately these could not be done in time and Gus and Julian did not get the chance to consolidate or improve their position.  The Fantome crew suffered a fairly snappy dismasting just below the spreaders while in a podium position in Race 4 which brought the regatta to a very abrupt halt for Ronan and Noelle O’Keefe, the latter sailing in her first Squib regional event. Hopefully it won’t be her last.

The Squib crews, broken but unbowed after a tough weekend which included plenty on the social side, made the trip home. We have a lot of work to do over the winter to get ready for the 2015 season which is going to be epic. In late June the Irish Championships and Squib Nationals will be hosted by HYC. The fleets are working to rally some dormant Squibs for the 2015 season in order to rejuvenate the fleet. As always we are anxious to recruit new blood to the fleet so don’t be afraid to get in touch!! 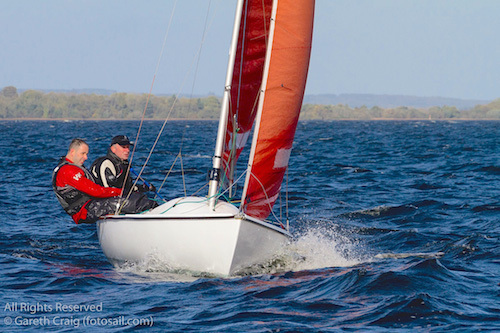 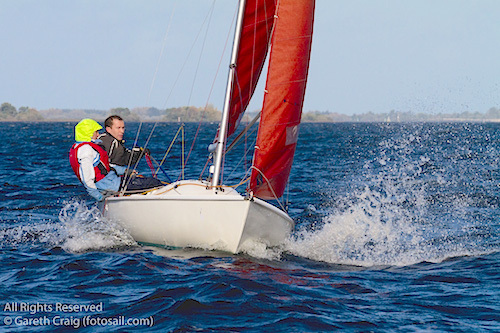