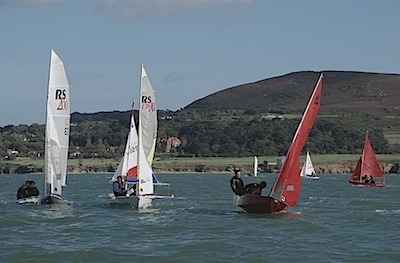 Five of HYC's laser sailors Ben Jennings, Tom Mulligan, Darragh Kelly, Daniel Hopkins and Tess Coyne competed in the Interschools regatta held over 2 days in Sutton Dinghy Club last week. Most of these sailors only started sailing lasers this year so it is fantastic to see the progress they have made.

Day 1 was light and tricky on the water with the wind fading away in race 2 to almost nothing. Two races were completed and the HYC sailors posted some strong results.

Day 2 dawned with water like glass in Sutton creek but eventually the wind filled in to give a lovely 10 knot breeze. Two races were again completed by Race officer Jim Lambkin and the Howth sailors did us proud sailing well in the 69 boat fleet.

Well done to all and to Sutton DC for once again hosting a terrific event.